If the portraits in “Everyday Gods & Goddesses” seem almost alive — if you think you see their eyes wink as you turn your head, and you wonder if they visit each other, Harry Potter-style, at night — well, that’s just your imagination. But these paintings do have stories, both ancient and modern, behind the canvas. Today’s tale: Venus and Adonis.

“Every mother thinks her son is the most charming and handsome of all … obviously my son is!” — Linda Lawler, placard for Adonis – My Son

Artist Linda Lawler’s son is the model for the Adonis painting, but in mythology, Adonis’s mother is a tree: when he is born, the trunk splits open and water nymphs pull him out. Even as an infant, he is famous for his beauty — and as a man, his looks catch the eye of the goddess Venus, who “even forgoes the skies, preferring Adonis to heaven,” as told by the Roman poet Ovid. (Linda Lawler’s model for Venus was her friend Jennifer — who also modeled for the less-than-lovely Medusa on the opposite wall.)

Venus warns Adonis, who is fond of hunting, to watch out for wild animals, but he ignores her (always pay attention to goddesses!) and is gored by a wild boar. The grief-stricken Venus creates a new flower from his blood, Ovid writes: “But enjoyment of it is brief; for, lightly clinging, and too easily fallen, the winds deflower it, which are likewise responsible for its name, windflower: anemone.”

Let’s hope the other myths don’t have sad endings, too. But speaking of brief enjoyment — “Everyday Gods & Goddesses” is only open through May 6, so see it while you can! 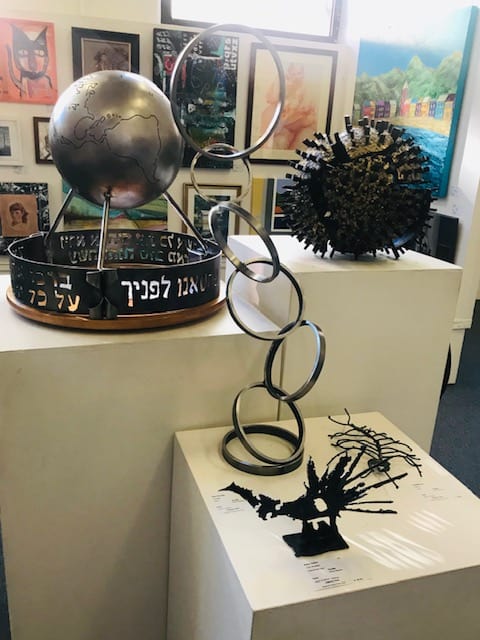